Along with Marcus Lorenz, we dive into the secrets of growing eCommerce stores from startups to fast-maturing businesses with astonishing results, featuring the example of Lampenwelt.

Marcus Lorenz started Lampenwelt in 2014, when this rising star of eCommerce had only three people in the IT department, headquarters in the owner’s garage and was selling its products on eBay. Since then, Lampenwelt has achieved amazing success and now makes over EUR 100 million in revenue. What were the key elements of this growth? How do they build solutions close to the customers’ view? How did they approach technology and complete their teams? How did they settle and stabilize their technology? And most of all, how did they use microservices to construct their IT structure and make it ready to grow and scale globally?

You will find all these answers in this episode of eCommerce Talks.

Marcos Bravo C.: Thank you for joining us one more time. This time I have the pleasure of having Marcus Lorenz here. Marcus is the chief technology officer in Lampenwelt. What would you call it? A chief tech or CTO or …

– Wonderful! We really wanted to have you here, because in the previous episode we had Jochen Wilmes telling us about the success story of Lampenwelt: how it went from an eBay store all the way up to what it is now. But before we get into that, if you want to tell us a little bit about yourself and how you ended up working with such an amazing company.

– Yeah for sure, thanks for having me. My name is Marcus, I joined Lampenwelt in 2014. I started to take over the IT department and just grow it, from a very small department to now a bigger one. Our strategic goal is to do a lot of insourcing on key competencies that we see in eCommerce. We want to bring in the eCommerce knowledge of frontend development, data warehousing and all the stuff that is focusing on eCommerce and the eCommerce platform. And it is a pleasure for me to build up this team and dynamic eCommerce story with Lampenwelt and also a fast-growing company in eCommerce, which is, yeah, very cool, with a very cool CEO and CFO guys…

– Cool :) At the moment you’re growing the team, right? How many people did you have in the team when you joined and how many are you planning to have?

– Yeah okay. So when I joined Lampenwelt we started with three people, which is not very much. Now we are approximately 30 people and our plan is to grow the team just to go get more competences inhouse, especially for frontend tasks, backend tasks and for what’s very close to the eCommerce frontend view or the customer view.

– If we look at the story of Lampenwelt, and if people missed our other episode, we know that it was in 99 that it all started? It was an eBay Shop, right?

– Yeah, exactly. Thomas, our CEO and founder, founded Lampenwelt in a garage. So he started it on eBay and after that, he was starting to focus on his first domain, which was lampenwelt.de and he was selling, in the first step, all the products on eBay and in the second step he founded Lampenwelt and put the first SKU’s on the website and sold the articles and learned how eCommerce is working.

– One of the things that happened with a lot of companies is… it’s probably what happened also with Lampenwelt, you guys took huge growth, but then around 2016 when you actually were there already, you had to figure out ways to keep growing. Everything has a top, right? No solution goes up forever. So, for you, what was the process? How did you try to figure out how to evolve the platform or to improve the platform?

– Yeah, a good question. Basically, we did a kind of settlement, so as we saw how the company was growing, we had an app in the right direction, I think we had to settle and stabilize all platforms on the eCommerce side, on the backend side and do some strategic decisions about what we are going to do next. We were focusing on the Magento project, just to settle all the stuff that we had done in the past and now we are preparing for our next moves, to go up over 100 million revenue, and to go into some new markets.

– Well, basically my point of view is that every company learns from each other and you see something going on on the market and so you’re adapting from the bigger eCommerce players, maybe the smaller ones adapt to them also or to Lampenwelt stuff. And, I think, or in my perspective, the key challenge is to decouple all systems, strictly pare them down and focus on what they’re doing. Just build no-monolithic structure, like we did in the past, focusing on service architecture so that you’re much more flexible in the frontend or just add new services in the backend, to keep up scaling and also to have the chance to replace one system by another without breaking the whole ecosystem.

– That’s cool. That’s something we’ll be talking in the show, which is moving from monolithic to microservices and regarding that, I mean not just that specific change, but the evolution of eCommerce – we think of things like monolithic to microservices – but what else? How do you see the future of eCommerce in specific? Like, what will have to happen next? So for the next growth stage or for the growth wave if you want to call it that.

– … completely on the tech side. What would be the next things that we should have in our hands to keep growing and keep advancing?

– I think the main thing is that you or we as eCommerce pure players, have to focus on frontend capabilities and just put the backend stuff aside, just a little bit, because in the frontend we do a revenue with our customers. And if we want to grow with our customers, we have to have a backend which is just playing in the background, which does the standard and commodity stuff and for me, as an IT director, it is important to focus our employees on the right things, which is the frontend. So all the parts we’ve done in the past, like backend hosting also frontend hosting is not a task I want to have in the future. Our teams should focus on writing code and deploying it somewhere, and other teams or other players on the market should focus on hosting this code and on running this code on a platform.

– When you were talking about growing the team, we’ve seen that there is a worldwide issue to find the right talent, to find people who know what it takes to get to the next stage. How are you guys facing them? Like how was the process for you guys to find the right people?

– …first of all, they’re committed to the company. And the second thing is there’s a strong traction of the team, which is following the team lead and you push up the whole team to the next level, if the team lead is working fine. So it doesn’t have to be the technical expert of everyone, but he has to have a strong vision of the direction of the company, a powerful mindset when it comes to people. And on the other side, when you have strong team leads, you come back for those strong team leads also with juniors, which we are recruiting on high school and therefore we have some talks at high school.

– So, you get sort of invest in the future.

– Exactly! Part of our job is to go to high schools or do some technical presentations on expos or fairs or something else, just to talk about technology and also to promote Lampenwelt.

– Now, from the microservices aspect. What sort of tools are you guys using like constantly. I mean, I know Vue Storefront is one of the favorites that is used nowadays, but like what are the… I mean considering that one, what else do you recommend to use or what else are you guys using in order to scale rapidly?

– I don’t know if it’s this decision on the right tool, I would say that it is more the decision on the right way. If you are going to decouple your infrastructure, it doesn’t matter if you’re using Kafka or Nuts or something else to decouple the infrastructure and go into a microservices architecture. It’s more that you should focus on the way to do it, and just use microservices or service oriented architecture to follow this path, so if you do it later on, what tool A or tool B I don’t know if it defines the…

– Something that we ask a most of our guests. If people watching right now would like to learn or know how to get to this next step. Is anything you’re reading right now? Is there anything, any podcast that you’re listening to that you would like to recommend?

-Yeah we had some awesome podcasts in Germany. I’m personally following the one podcast I can recommend – it’s called Kassenzone in Germany and there’s another one, which is called Digital Kompact, which is a little bit broader on this point of view. And also, I read a lot but it’s not very focused on technical terms, it’s more for my position on how to scale up teams and a quite good book I was reading was Seven Habits of Highly Effective People, I enjoyed it much, – just reading it, understanding it and working on habits to get the people on the team more effective.

– Awesome. One last question. When you think of the future of not… I mean, we know that eCommerce is taking over and it’s making companies go from zero to one hundred, just like that. What do you think, what’s gonna happen with the brick-and-mortar stores? should companies still be investing, having a real physical store or are these stores gonna disappear sooner rather than later?

– I think it depends on the business model. On maybe furniture, there’s also a cool thing to go into a physical store and just try out all the furniture, there are other things, maybe glasses or something else, which you don’t need to touch in a physical way. So it depends really on the business model and there is no “this would work in the future and this won’t work”, but all things that you can imagine from your mind and which is more than a commodity product, clothing and so on, I think it’s really hard to get there with a brick-and-mortar store at this time. And there you have to do a kind of key differentiation, that you are consulting your customers or something else, to differentiate from the eCommerce ecosystem

– Excellent. Well Marcus I know you’re pretty busy nowadays, so we’re gonna let you go, but first we’re gonna thank you for being with us and I want to thank everybody for watching. Marcus any time you’re more than welcome to join us again.

– Perfect! Thanks for having me. Okay, cool, thanks. 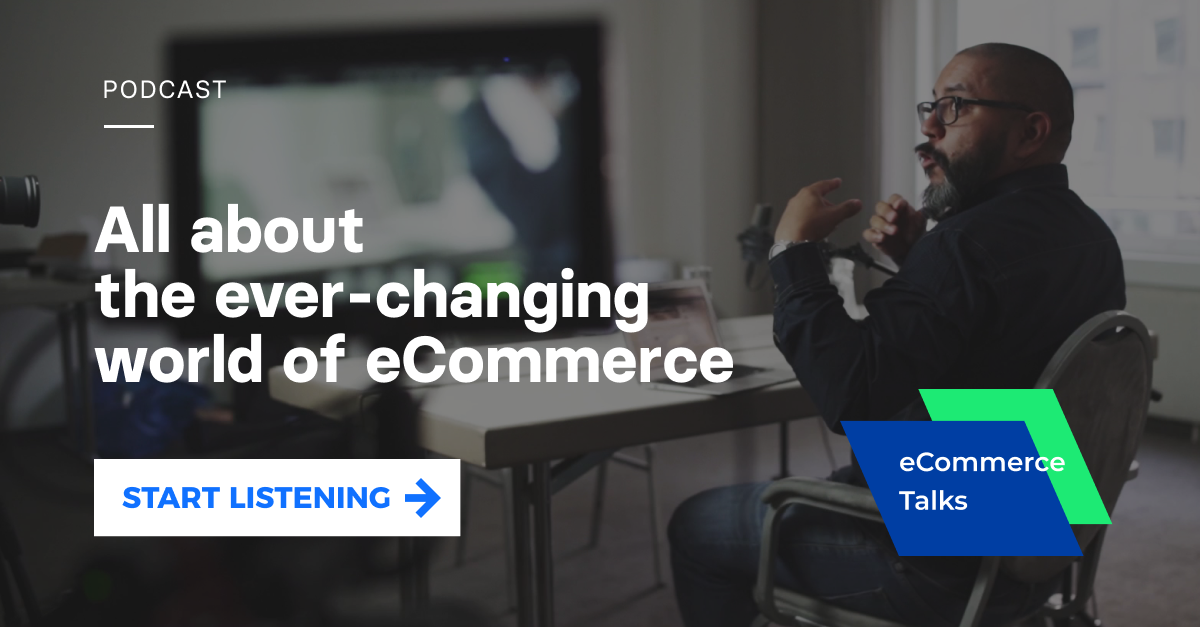